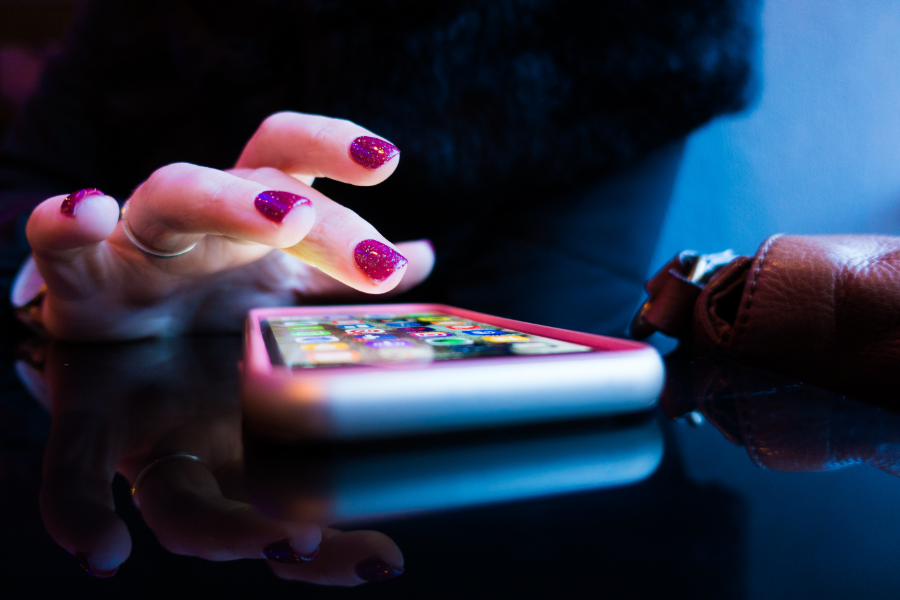 Here’s what we cover (click the links below to jump to the relevant sections):

“Buy Now, Pay Later” apps, helpfully abbreviated to BNPL apps, allow users to make purchases and pay them off via quick, interest-free installments. For example, if a purchase of 1,000 U.S. dollars is divided into four parts, a user would pay 25% (250 U.S. dollars) upfront and three additional installments of 25% until the purchase is paid off. BNPL apps are easy to use and their low fees make them especially handy for medium-sized purchases.

This chart offers a quick glimpse at how the top five BNPL apps have performed over the last 30 days. It includes estimated downloads, overall growth trends, top chart rankings, the number of new ratings, top countries, the date of the most recent update, and the number of changes made to the app.

Klarna is the top dog here, registering over three times as many downloads as the next best performer, Afterpay. Klarna’s downloads are also trending upwards and strong enough that it’s currently ranked in the top 100 ‘Shopping’ apps in 17 different countries. What’s more, it’s received 15.9K new ratings over the last 30 days.

We’ll leave it to you to digest the rest of the chart’s information except to point out a couple more interesting tidbits. First, Afterpay is the only of the top five BNPL apps trending downwards. Second, and perhaps not coincidentally, it’s been updated six times in the past month, tying it with Zip for the most updates over the time period. 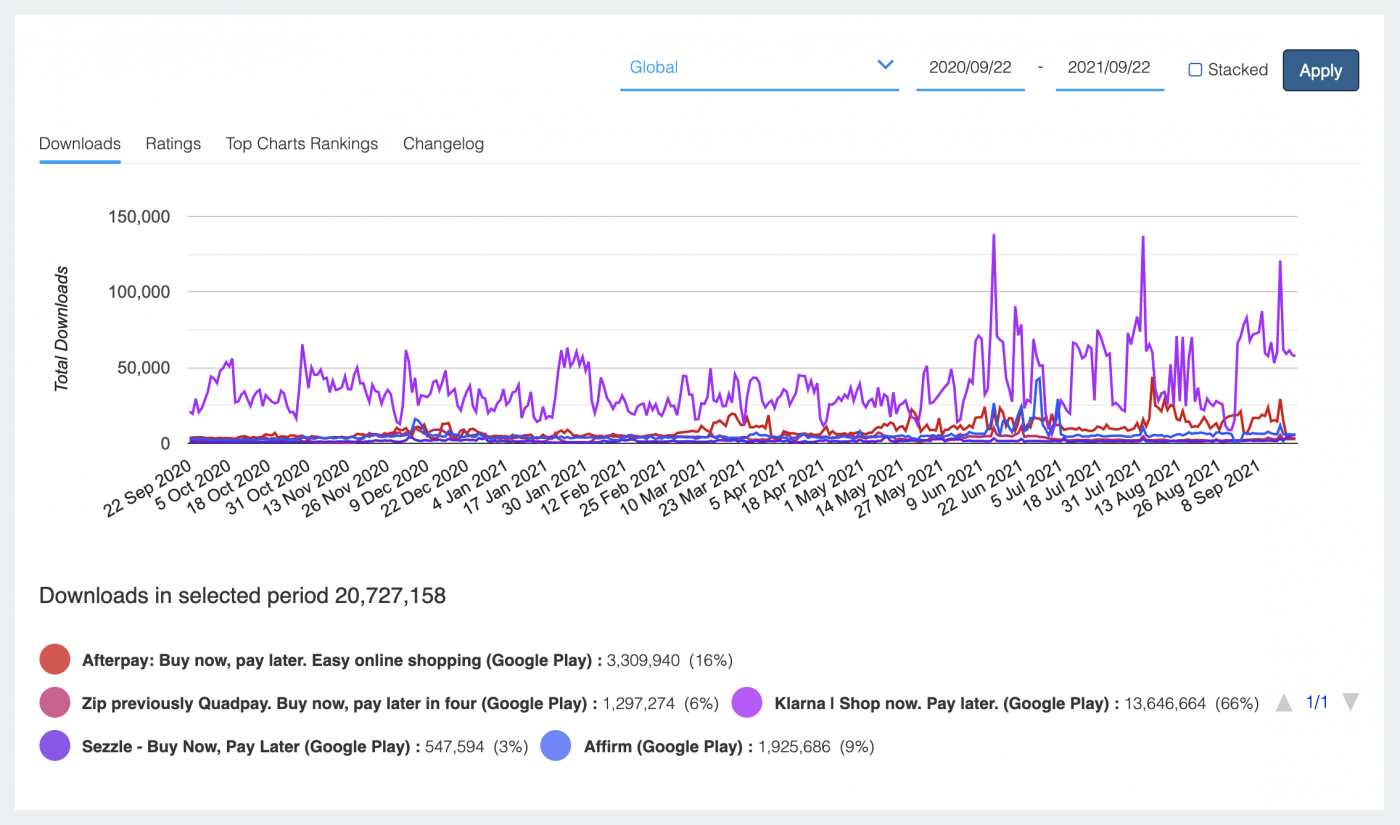 Next, historical downloads. This graph depicts daily downloads for each of the top five BNPL apps over the last year. 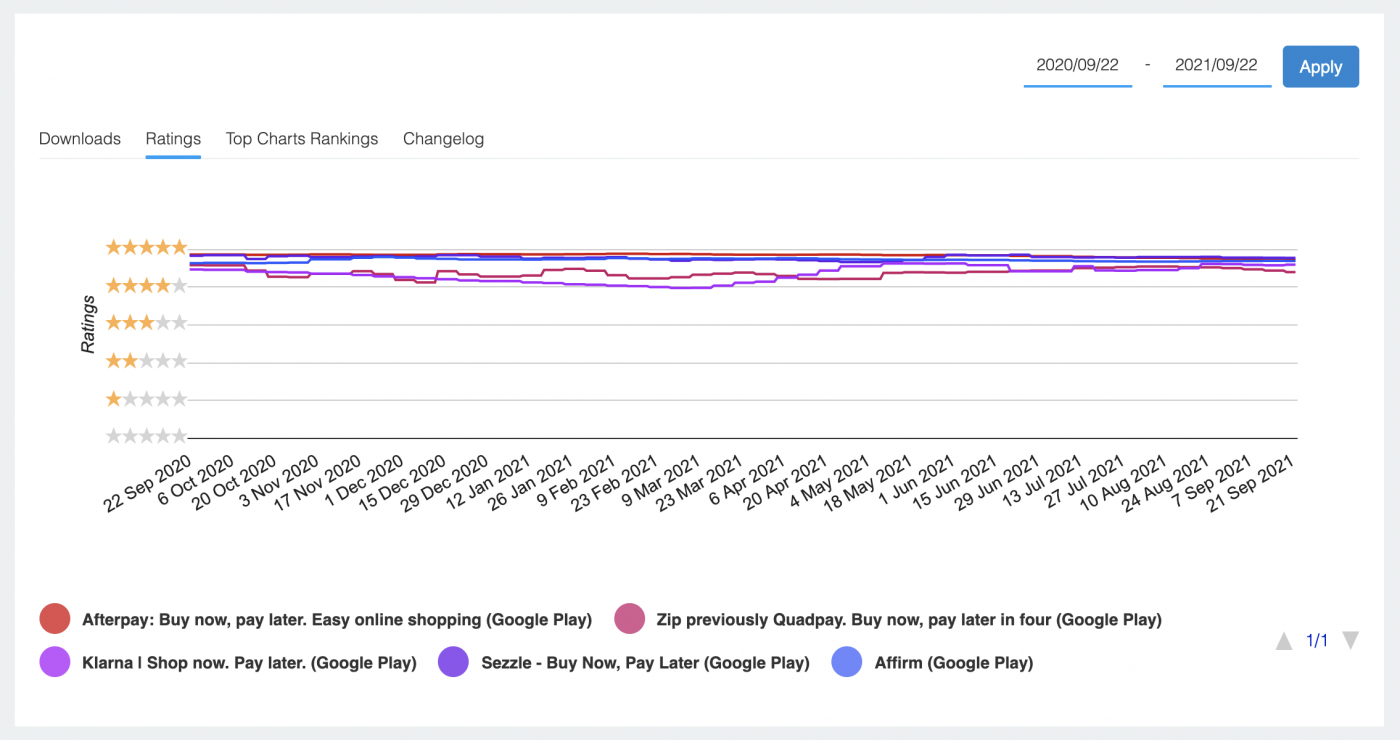 This takes us to ratings. Each of the top five BNPL apps are rated above four stars on Google Play. Sezzle, Afterplay, and Affirm currently lead the pack, averaging 4.772, 4.716, and 4.693 stars, respectively. Klarna and Zip have been a little less steady, often dipping below 4.3 stars. 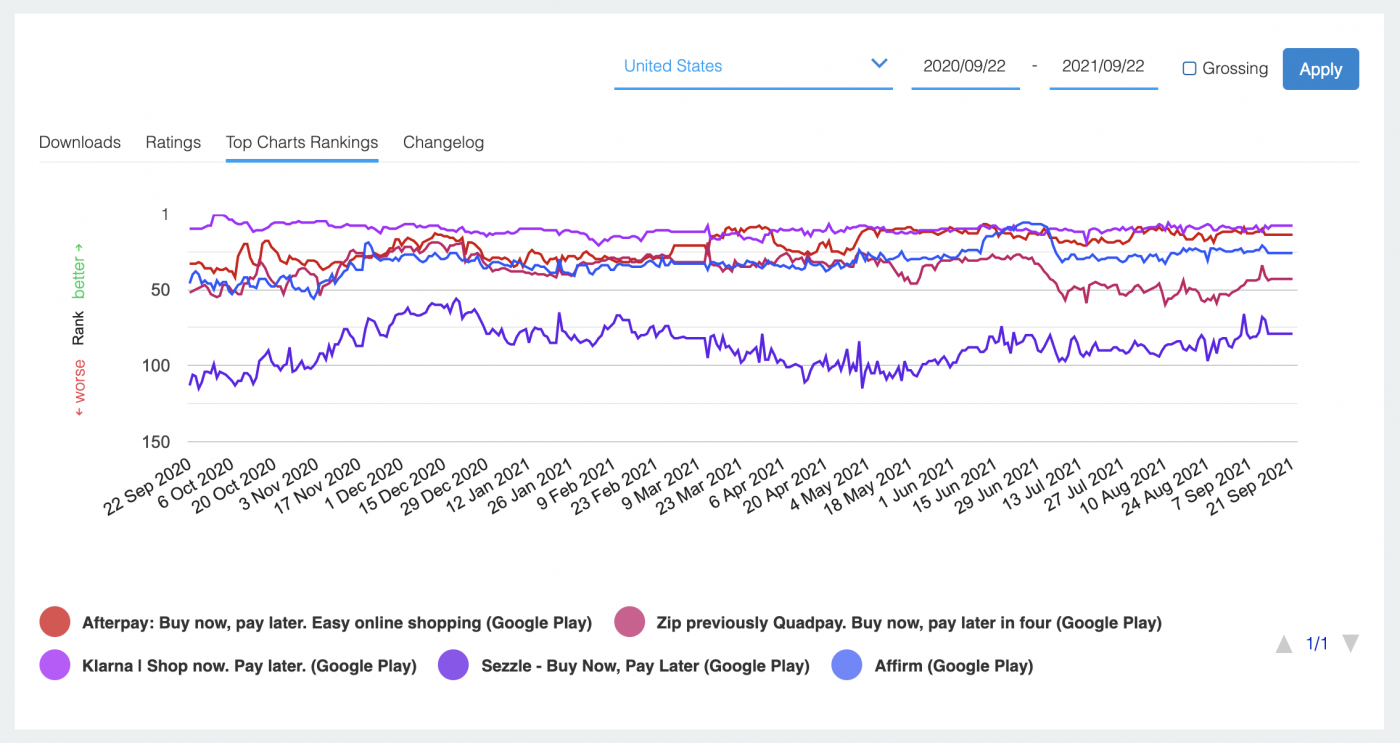 Moving on to top chart rankings. As it stands, each of the most popular BNPL apps ranks in the top 100 ‘Shopping’ apps in the United States.

If there’s one outlier, it’s Sezzle, which tends to hover at the lower end of the top 100. However, considering that Sezzle has the fewest downloads of the top five, that’s not actually a bad showing. Most apps would kill to rank consistently in the top 100 in their respective categories.

It should also be noted that Klarna, which is the eighth ranked ‘Shopping’ app in the United States, also charts in 17 additional countries. That’s considerably more than Afterpay (3), Affirm (2), Zip (1), and Sezzle (2). 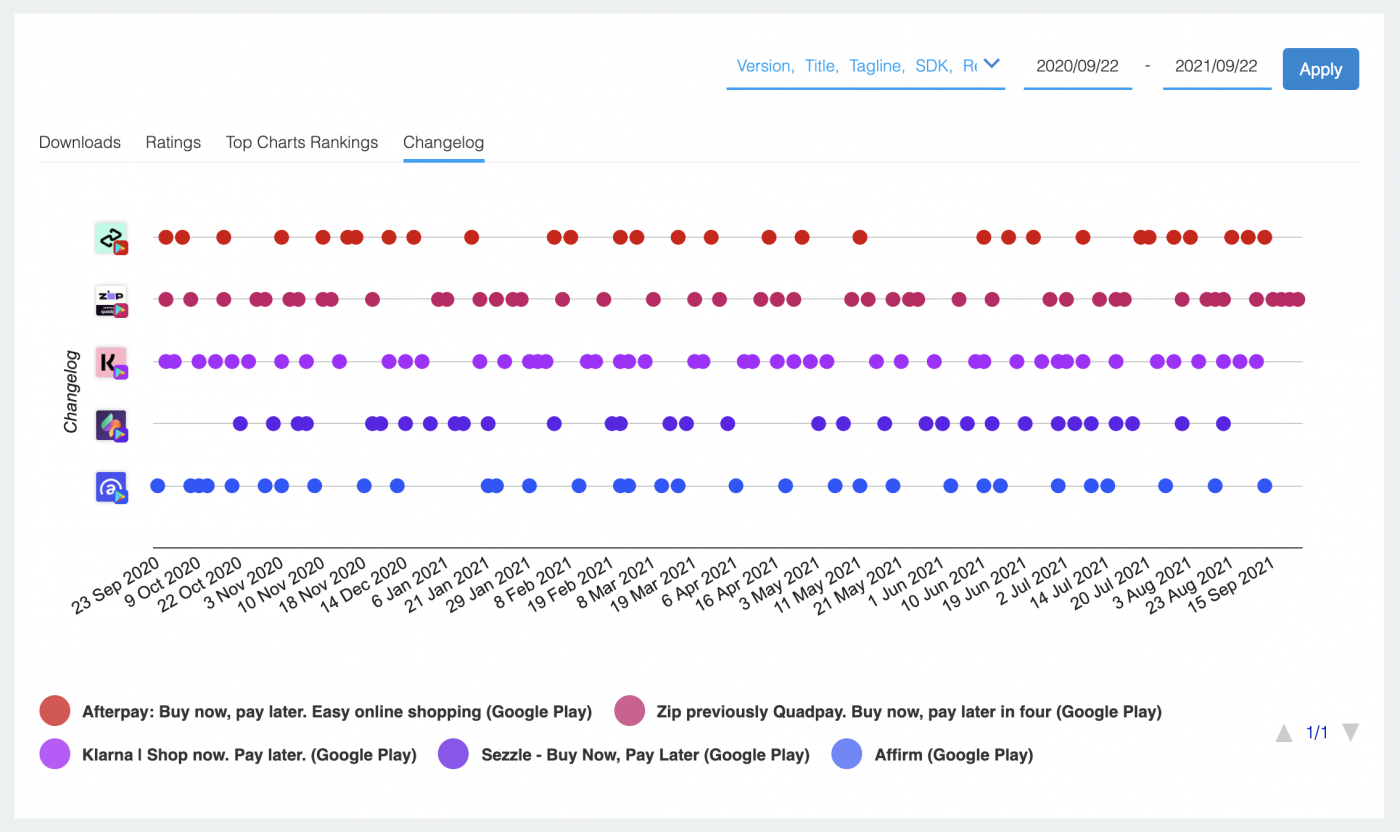 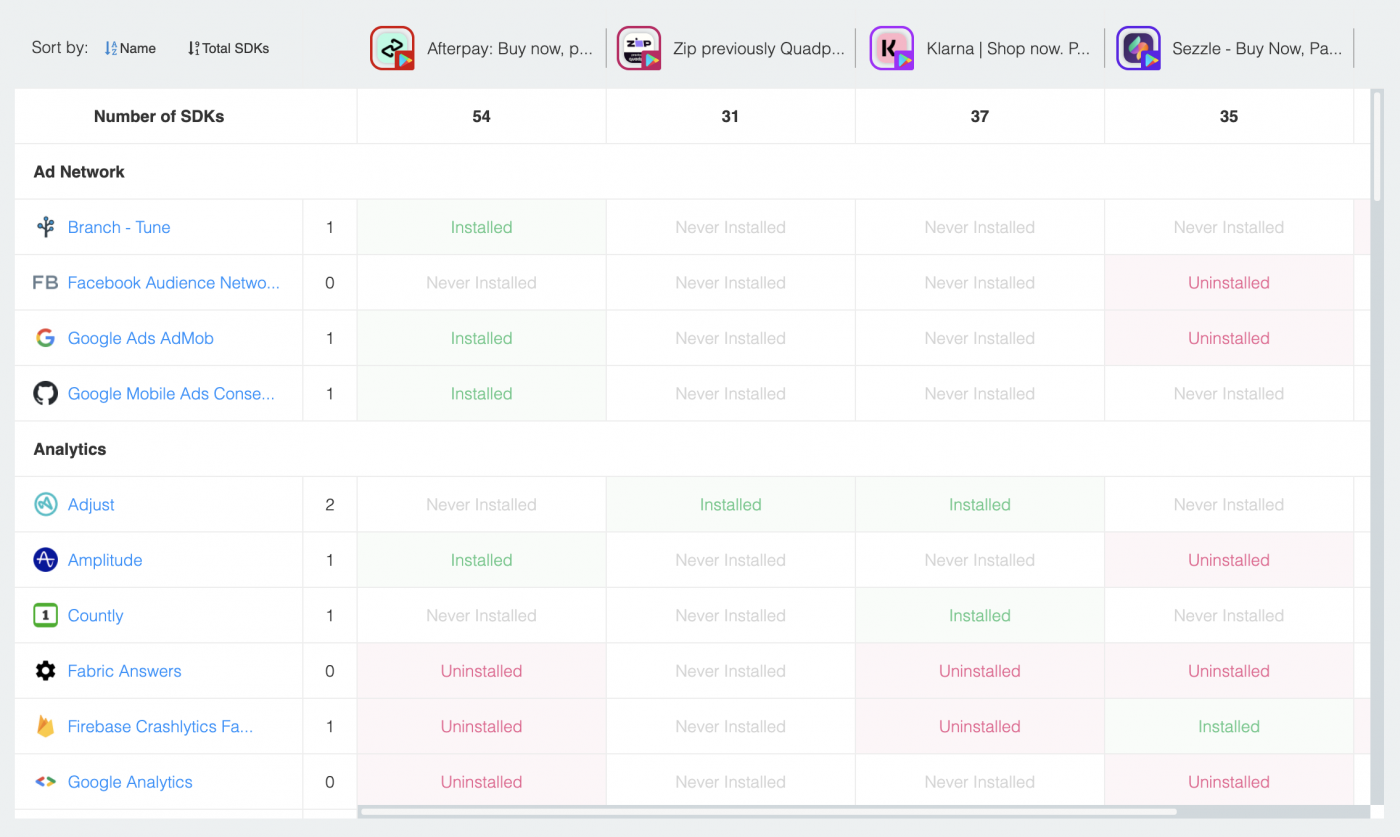 Another interesting point of comparison is which SDKs these apps integrate. Afterpay currently uses the most (54), followed by Klarna (37), Sezzle (35), Zip (31), and Affirm (19).

Moreover, all five of these apps use the Google Firebase SDK, the EventBus SDK, the Firebase Cloud Messaging SDK, the gson SDK, the Lottie by Airbnb SDK, and the OkHttp SDK. 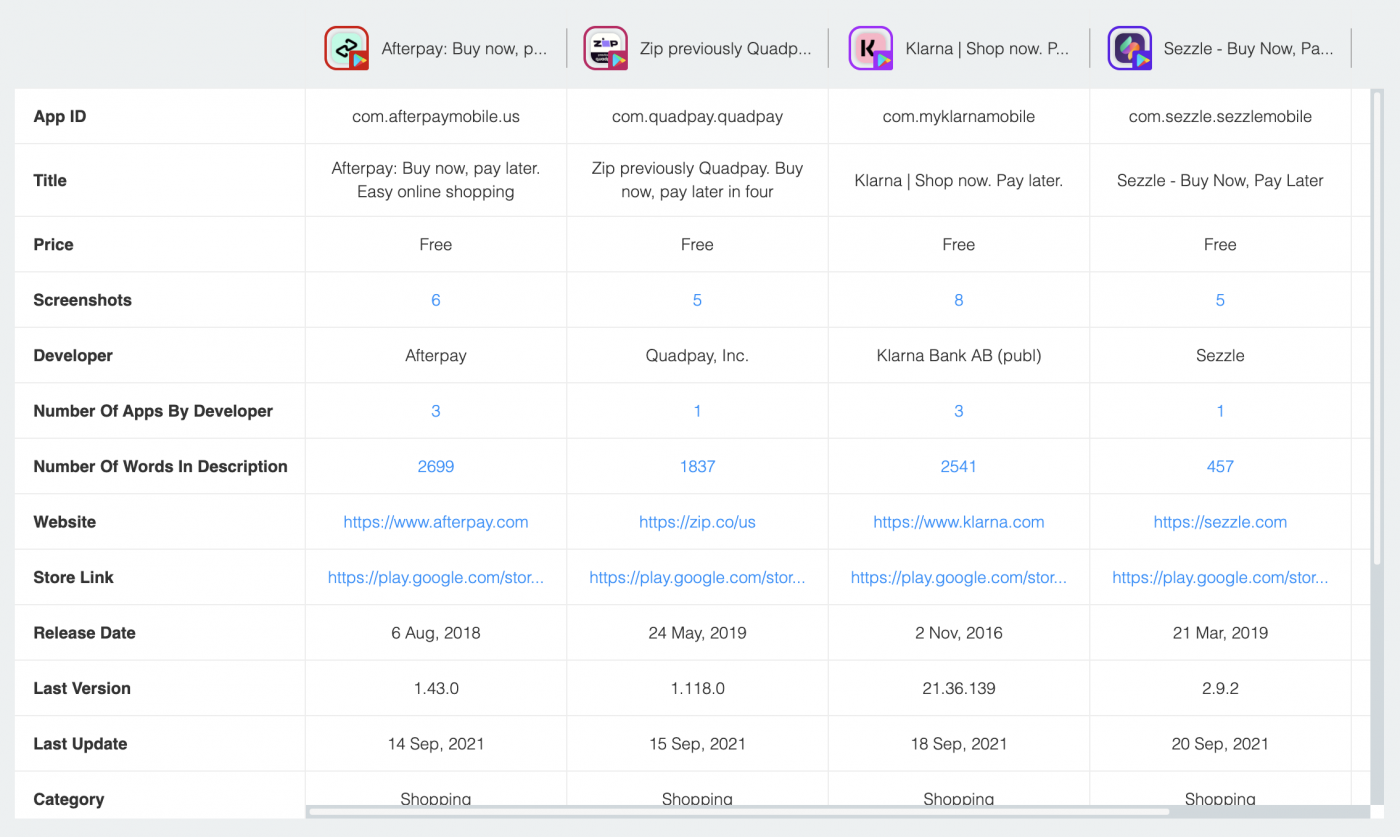 The BNPL app landscape is still quite young. Indeed, Klarna, Afterpay, Affirm, Zip, and Sezzle make up approximately 70% of the current market.

While Klarna is clearly the global torchbearer, their place leading the ceremony is by no means permanent. A company like Afterpay or Affirm could quite easily catch up, let alone an as yet unfounded start-up.

There are certainly plenty of users to go around. While just these five apps have been downloaded over 13.5 million times, it’s worth keeping in mind that retail, in general, is big business. In the United States, for instance, consumers spent 5.58 trillion U.S. dollars on retail in 2020 alone.

Moreover, it’s also worth noting that there will almost certainly be a good deal of post-COVID belt-tightening. With growing concerns over inflation and general economic instability, services such as BNPL apps have a golden opportunity to prove their mettle. That is to say, in the world of BNPL, the best may be yet to come.

Get Started With 42matters!

At 42matters, we provide app data, insights, analytics, and competitive intelligence via a host of useful APIs, file dumps, and the 42matters Explorer. This includes:

The 42matters Explorer, which you can try free for 14 days, is an app market research tool that offers a comprehensive look at app trends and statistics. This includes data on both iOS and Android apps.

To learn more about 42matters, schedule a meeting with one of our app market experts. We'll walk you through everything. 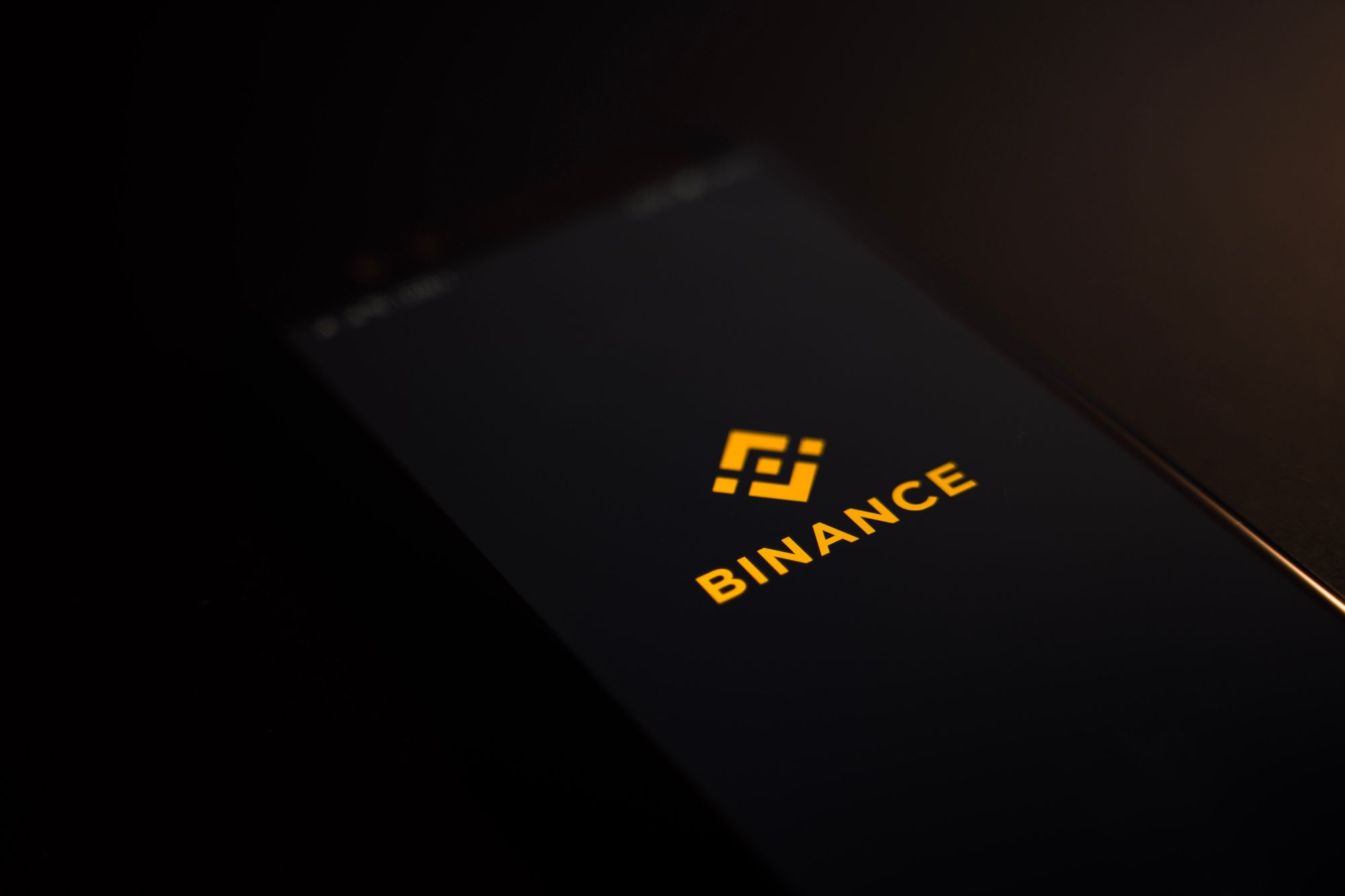 Downloads Plummet for FTX, BlockFi, and Other Crypto Apps

FTX fallout continues to rock the crypto world, claiming BlockFi as its latest victim. So, we analyzed demand trends for crypto-related mobile apps.

Black Friday is back! So, we analyzed the most exciting “buy now, pay later” (BNPL) apps in Germany, Austria, and Switzerland. Here’s what we found…

Elon Musk has purchased Twitter. Now, millions of users are turning to alternatives like Mastodon, which has been downloaded 650,739 times this week.

Downloads Plummet for FTX, BlockFi, and Other Crypto Apps

FTX fallout continues to rock the crypto world, claiming BlockFi as its latest victim. So, we analyzed demand trends for crypto-related mobile apps.

Black Friday is back! So, we analyzed the most exciting “buy now, pay later” (BNPL) apps in Germany, Austria, and Switzerland. Here’s what we found…

Elon Musk has purchased Twitter. Now, millions of users are turning to alternatives like Mastodon, which has been downloaded 650,739 times this week.